Washington Martial Arts Association | Tax on Martial Arts in Washington State. A Mistake Was Made and HB2334 Fixes It
Self-defense training, bully defense, anti-abduction, etc… are certainly not AMUSING, ENTERTAINING or ‘recreational’ types of activities. Martial arts and self defense are completely different types of activities from everything else on the list of activities affected.(except yoga, tai chi and chi gong) They address and deal with personal SAFETY issues.
15778
single,single-post,postid-15778,single-format-standard,ajax_fade,page_not_loaded,,qode-theme-ver-7.7,wpb-js-composer js-comp-ver-4.7.4,vc_responsive 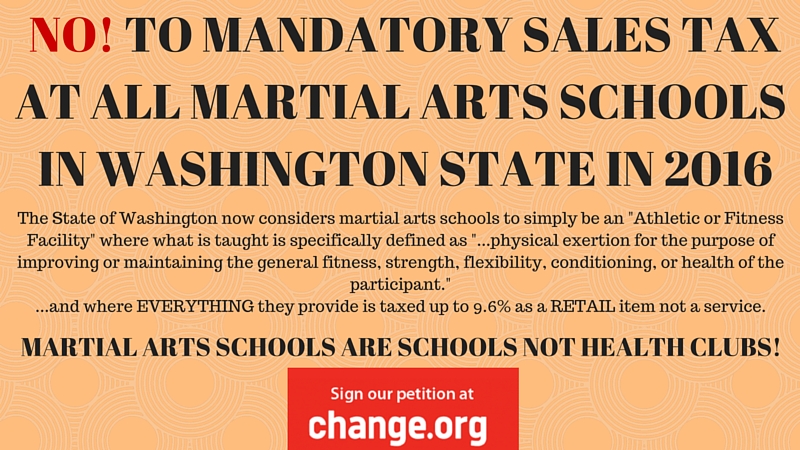 Posted at 20:42h in Uncategorized by ericadmin 0 Comments
0 Likes
Share

There is a misconception that this is an ‘anti-tax’ story.  It is not.

These are the most compelling and outrageous aspects to support each possible story idea.  We’ve made the first sentence a ‘teaser’ to make it easy to skim for relevant support materials.  All of these are linked to primary sources, can be backed up with documentation at a moment’s notice or shared via Dropbox link.